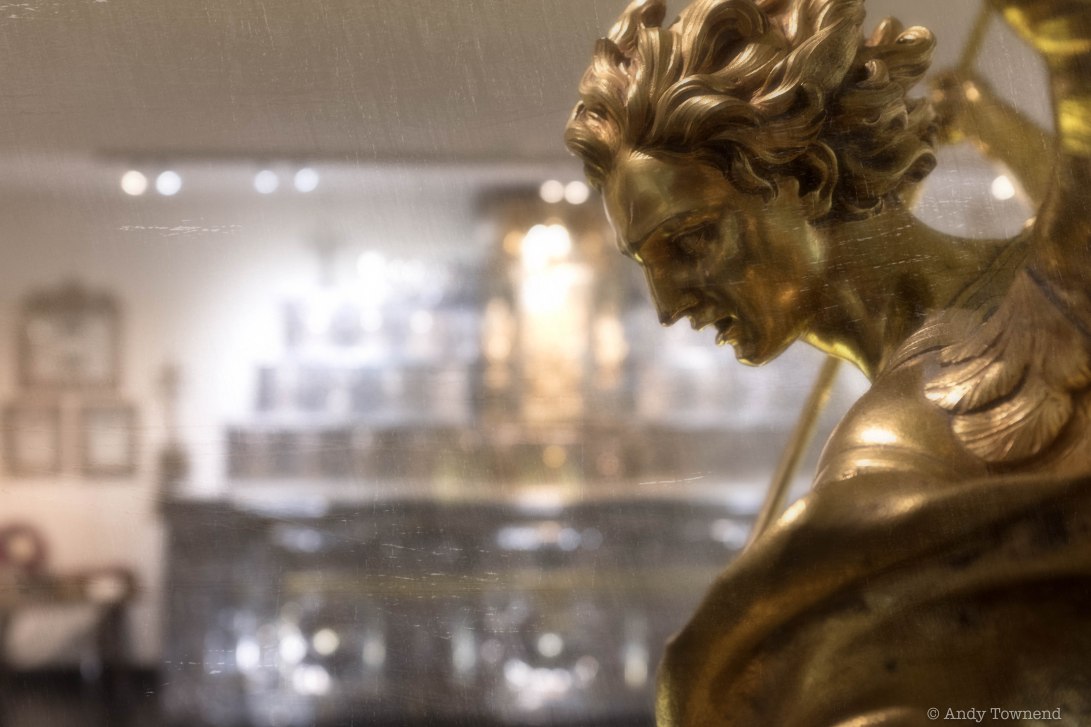 Delighted to hear the news that the Museum of Contemporary Art is opening again after ten long years. Six years ago, it featured in one of the first posts that I wrote on, what was then my new blog, belgradestreets. 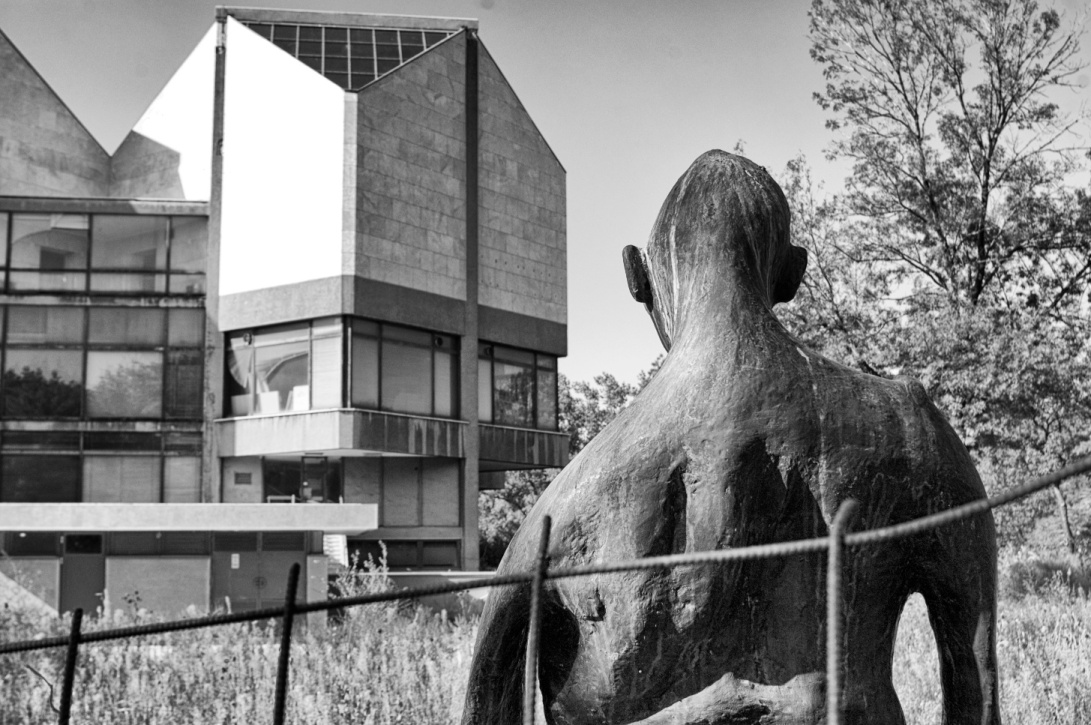 Decided to add an extra post today, a sort of ‘Sunday Supplement’.

Yesterday, whilst shopping at Ušće for some of the random necessities of life, I wandered across the swathe of parkland that lies along the river toward what seemed a rather fascinating yet random group of sculptures set among the grass and trees, it became clear that they were not random but some of the outdoor (and now quite weathered) exhibits of Belgrade’s Museum of Contemporary Art.

Sadly closed for repairs since being damaged in the bombing of 1999 the Museum’s collection numbers some 35,000 works of art produced since 1900 in Serbia and the former Yugoslavia.

This lonely and decaying building, partly hidden behind fencing, is located near the confluence of the Sava and Danube and was designed by Ivan Antić and Ivanka Raspopović in 1960 with construction taking place between 1960 and 1965, Wikipedia states that…

I will be back with more for this challenge. I saw this gas station through the window of my bus, speeding through the night, and grabbed this hurried and blurred shot with my iPhone.

It looked oddly out of scale in the dark.

Writing in today’s Observer newspaper, Laura Cumming’s review followed the headline (at least in the print version) ‘These swings don’t mean a thing’ describing the Superflex installation in the Turbine Hall of the Tate Modern as ‘by far the worst Turbine Hall commission in the history of the Tate Modern’, and went on to suggest that, if she were Hyundai (who sponsored the commission), she’d ask for her ball back. 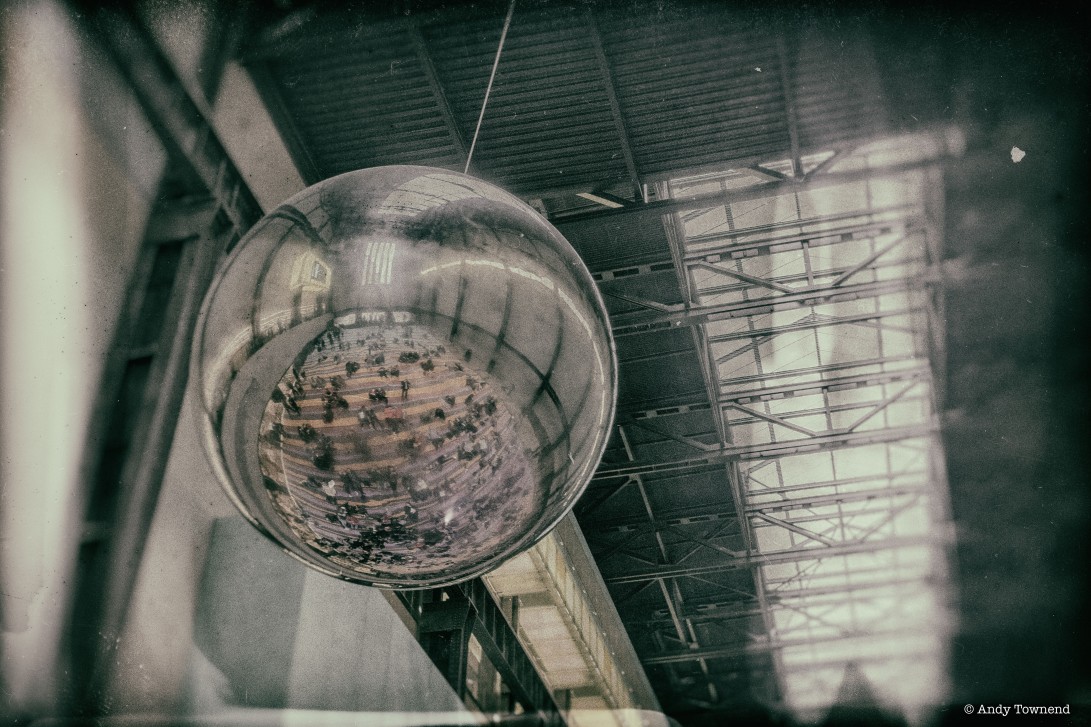 I am no art critic, but I wonder if her review missed part of the essential point of the Tate Modern? It is an open expansive space, much of which can be viewed freely. A space where those unfamiliar with art can have their eyes opened, their lives changed. The vast expanse of the Turbine Hall is indeed a challenging space for any artist to fill, no matter how sweeping their ambition or profound their talent.

END_OF_DOCUMENT_TOKEN_TO_BE_REPLACED

Everyone was nowhere to be seen
― Geoff Dyer

During all my frequent flying, I’ve finally got round to reading Geoff Dyer’s The Ongoing Moment, which I purchased in The Tate Modern Bookshop well over a year ago.

I’ve been particularly fascinated by the hatted figures in raincoats which feature in the work of Kertész. Blurred, and often awkwardly placed within the frame, strangely compelling, we share a fleeting moment in the life of these strangers.

This morning, as I nursed a cup of strong coffee after an overnight flight from Accra to London, I also lingered over an image of a group of people on a bench, World’s Fair New York 1964, made by Garry Winogrand.

I was about to delete the image above (too blurry and clumsy), but there was something about the group of people, the interplay between them, the connections, the role played by the pictured photographer unaware of her own involvement in another photo, something that made me stop pressing the delete button.

So, this image, blurry and unsatisfactory though it is, is my homage to Geoff Dyer for opening my eyes and encouraging me to learn from the work of some of the greatest photographers.

beautiful insane
in the rain
― Jack Kerouac, The Subterraneans 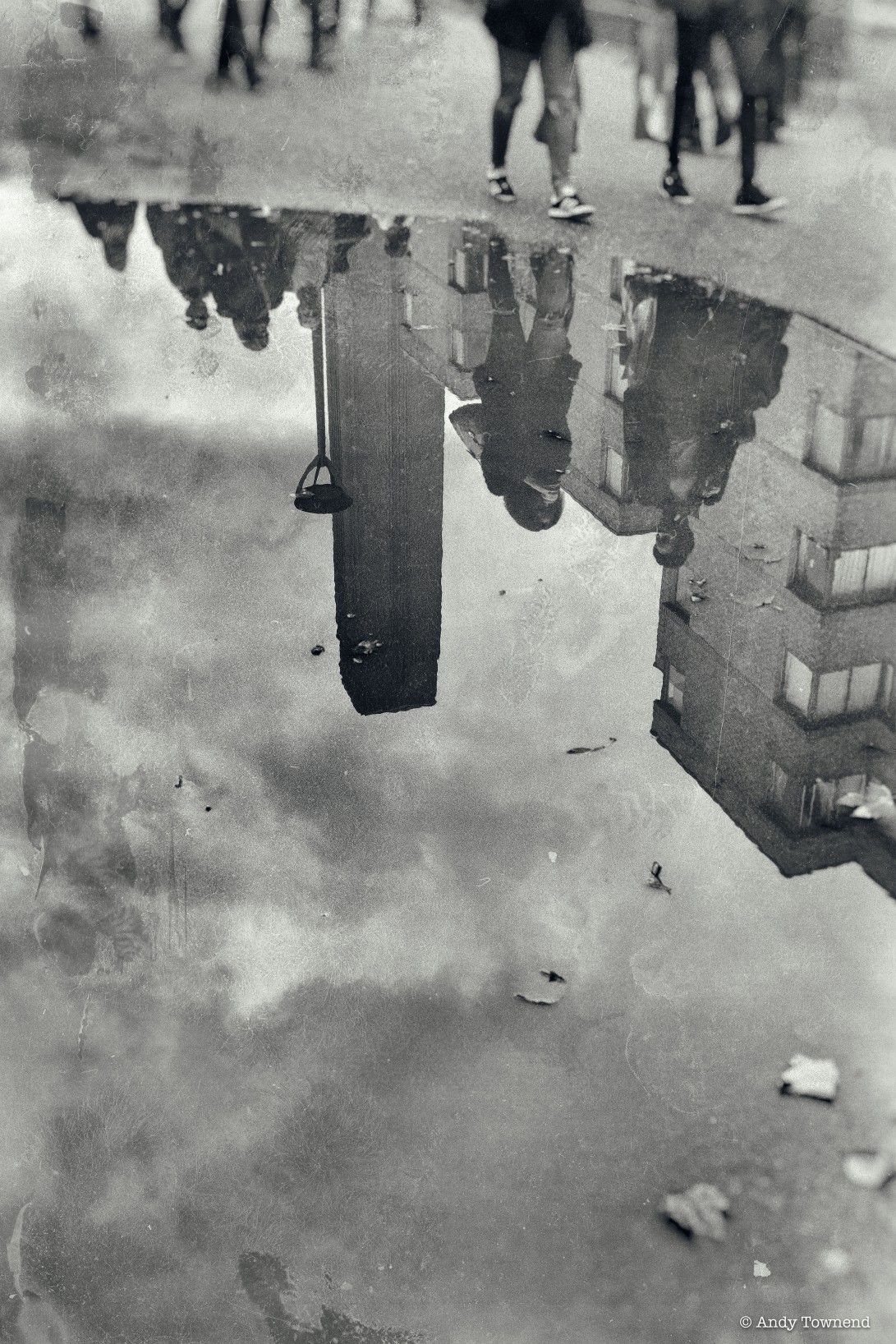 Everything but pedestrian, for WordPress weekly photo challenge.

Today, I finally bought my own copy of The Americans by Robert Frank with a sublime introduction by Jack Kerouac.

The perfect blend of photography, writing and poetry.

Inspired by one of my sporadic visits to the Tate Modern.

I gaze across at the trees.

Brittle branches blurred by the breeze, leaves coalescing into a swirling, suppurating soup in front of my aching eyes. You couldn’t make it up. Could you? Or maybe you could. Me, I don’t know. Don’t really know much right now.

I feel pressure in my eyes, darkness enveloping me. That old cliche. Gets them every single time. When I try to describe it to them. The feeling. Hell, I can barely describe it to myself. So how to them?

My fingers feel numb. My ever present and faithful companion (not the bumblebee this time), the pain in my back, ebbs. Hey, that’s good, don’t knock it. There has to be some positive side to all this. No? No, probably not. But I digress. I flow.

END_OF_DOCUMENT_TOKEN_TO_BE_REPLACED

A pedestrian reflection from Belgrade.

“To be a wave understanding the influence of the moon;
To be a tree and read the memory of the leaves;
To be an insignificant pedestrian on the streets”
– Dejan Stojanovic 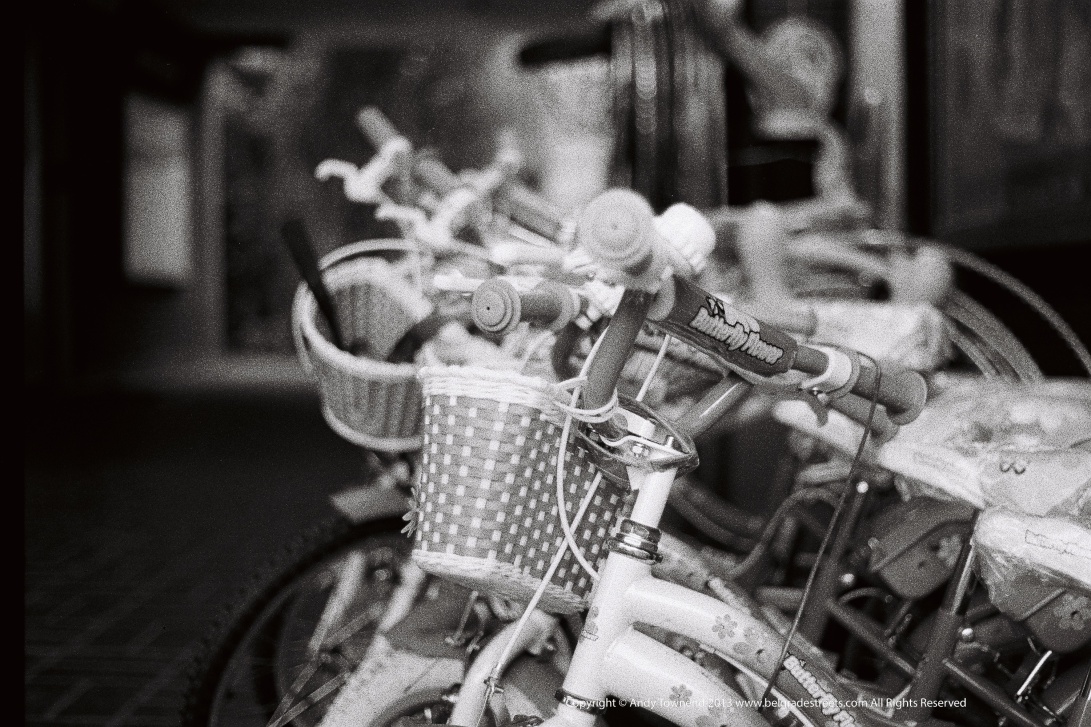 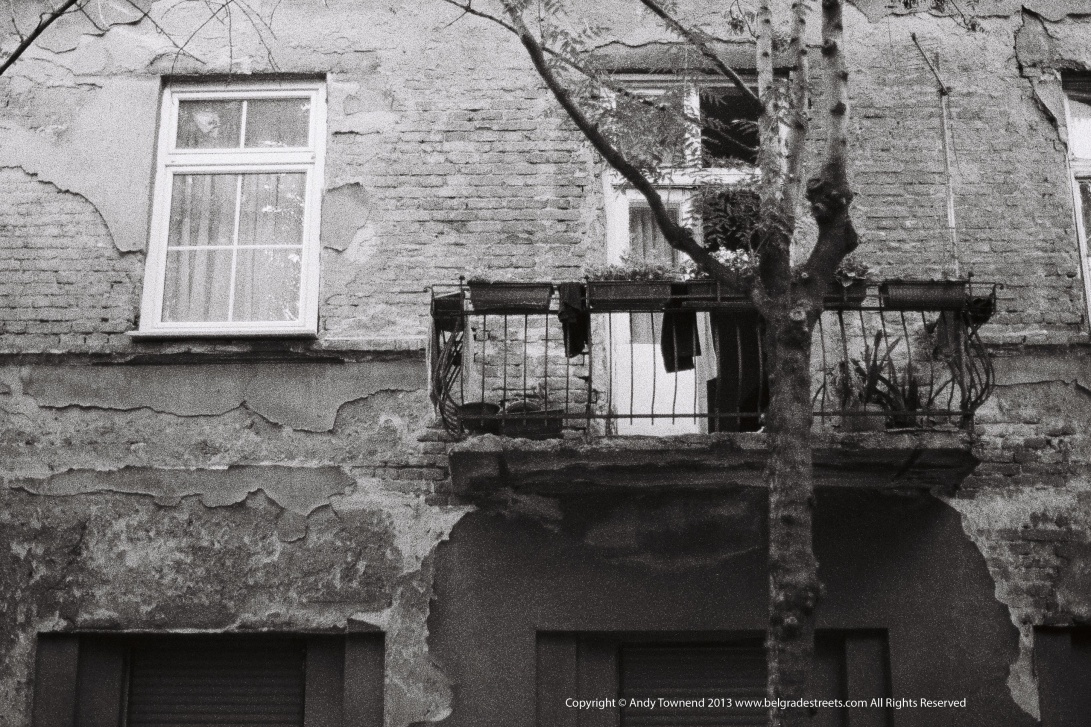 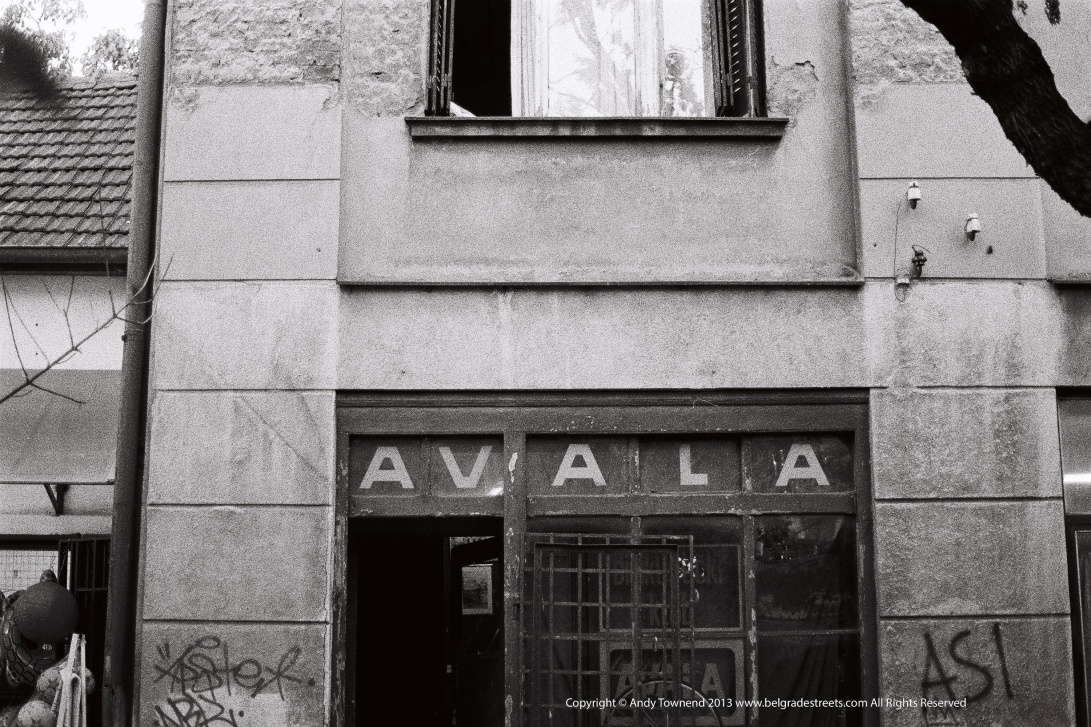 Images captured on a late Summer evening with my Olympus OM10 and 100 ASA black and white film.

…places where, if you die, you may simply die with the knowledge that your killer was in the wrong
― Lucy Wadham, The Secret Life of France