It is what you read when you don’t have to that determines what you will be when you can’t help it.
― Oscar Wilde

One of the advantages of being a frequent flyer is that it gives you precious time to concentrate on reading. And yes, I like to ignore the fact that many flights now offer the ‘benefit’ of in flight wifi. I prefer (vastly) the benefit of in flight disconnection from the world of work. It is (or was) one of the last few bastions of serenity and a place to hide from all those ‘whatsapp’ groups people seem to think aid communication at work. Don’t even get me started on that last one, it could become a post in itself and lead to unintended consequences.

Reading is one of the most precious gifts that we can give our children.

I remember when I was around about six years old that one of my favourite places of refuge was the ‘box room’ in my grandmother’s house in Rawtenstall. Actually, I think the box room had in fact been a place that my father was stored in as opposed to boxes but, no matter, it was a special place for me. It contained what at that age I felt to be an impressive library of books that opened up a whole world outside the (then) grim confines of Rawtenstall. The town’s buildings in those days were blackened with soot and the river that flowed behind my school stank of goodness knows what, concerns about pollution seemed a world away, and in many ways they were. The town at that stage was suffering from post industrial decline and its place in the world – defined by the dark satanic mills that once produced shoes and cotton for the Empire – was doubtful. And that is why those books were so important to me.

They were not great works of literature. They included the whole collection of William books by Richmal Crompton and – my favourite – a shelf full dedicated to Biggles, the creation of W. E. Johns. I read each book voraciously, regardless of whether I understood every word, or situation depicted, I could barely wait to reach the end and start the next one. In those pages I travelled the world with Biggles, Algernon, Lacey and many others. Those pages swept me away from the windswept moors that hemmed in the blackened buildings of Rawtenstall, to the South Seas, the deserts and the skies over war torn France. In my dreams I was up in the sky with Biggles.

And there were other books, including six volumes of an encyclopaedia (that somehow I have managed to hang on to) that contained maps of the world splattered in the pink of the Empire that had already passed.

Perhaps the best of all was The School in the Skies by R. S. Lyons. I don’t remember the entire plot but I do remember imagining the thrill of being free of the school yard and flying high above the clouds and experiencing something new. Every. Single. Day.

I wonder what that six year old boy would have thought of the year that – decades later – he has just experienced? This year, I have flown on 141 flights. And yes, I know, counting them may seem a little sad, but there it is. And I’ve had adventures too, every bit as interesting as those that I read about curled up in that cold box room with the rain lashing against the thin windowpanes of my grandmother’s house.

This last year, I’ve worked in Ghana, Nigeria and Ethiopia and visited the USA, flown back and forth between Madrid, London, Accra, Abuja and Addis Ababa. Seen the oceans and deserts rolling out below me, their siren call as strong, stronger, than ever.

And, the reading has continued. That precious gift.

Some years ago I signed up to Goodreads and have set myself a reading challenge each year.

This year, Goodreads tells me that I have read 29 of the 40 books I set for my challenge. Although it appears to have only recorded 24 of those, and missed one that I am sure I read this year, and so something seems amiss. Or maybe it’s me that’s amiss 😉

I spend my days working on digital transformation, and yes there is a book in that and I’ve even started drafting chunks of it. Despite that professional passion for all things digital and my continuing passion for all things Apple, I still prefer the feel of a book in my hands, the sensation created by each page turn, the anticipation of what remains to be discovered in those pages not yet opened. And I love to linger over a bookshelf, browsing, taking out an old friend and remembering.

So, here are the books that made it to my shelf. 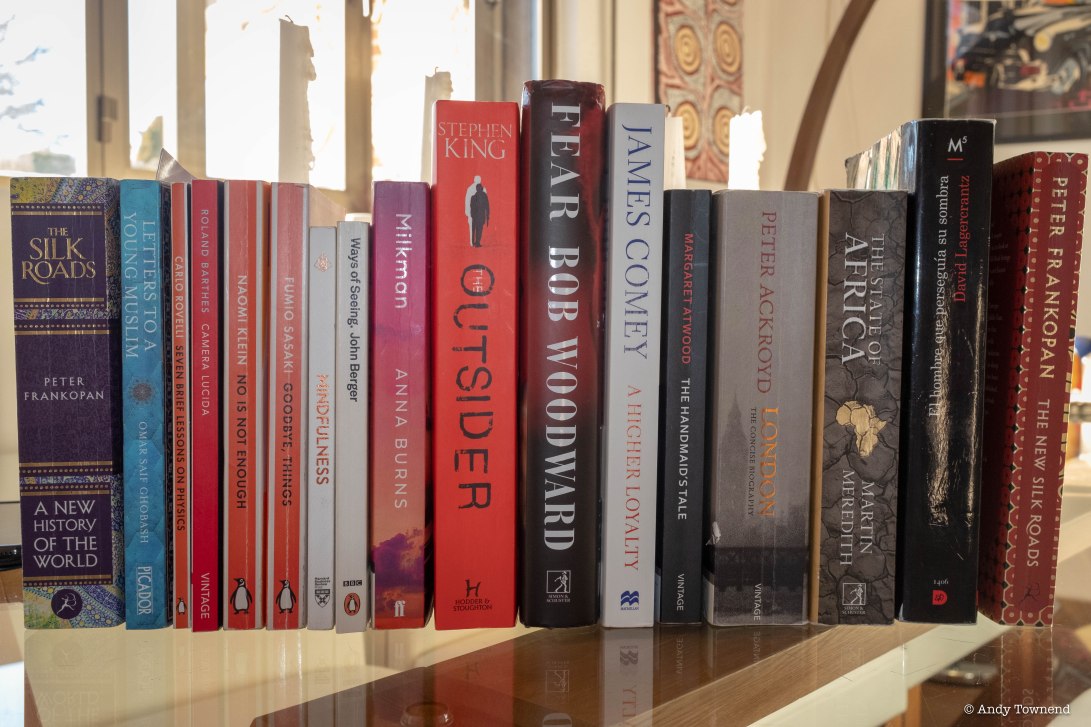 However, having dragged all the books off the shelf and photographed them I have realised that I missed two micro books of poetry – so they get their own photo. 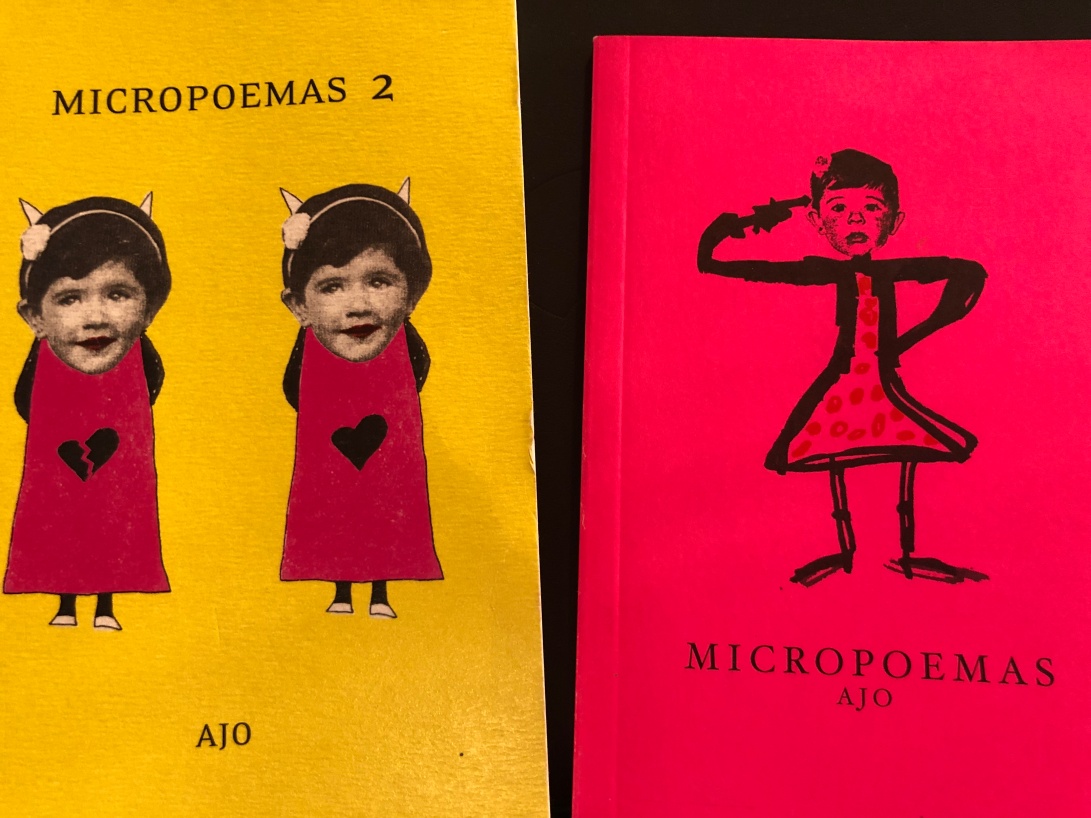 And the books that I did consume in their digital form, including one with the explicit goal of spending less time in the digital world. 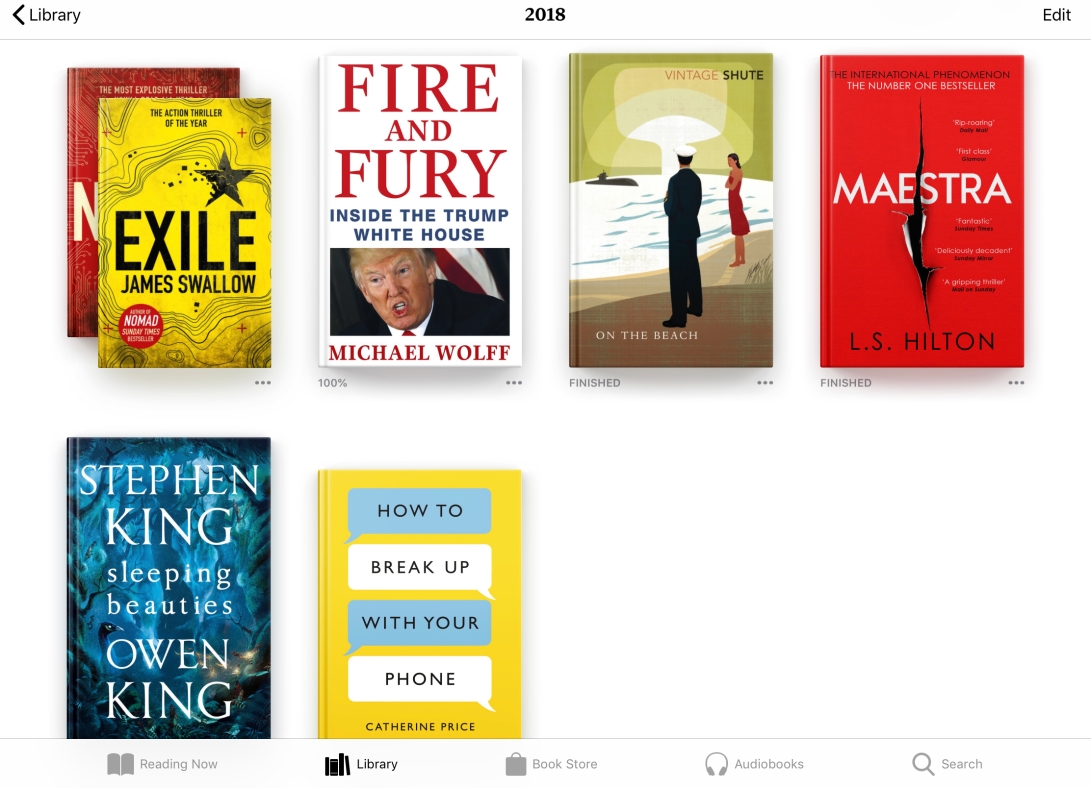 There have been a few themes to my reading this year, of which the first is that I have read a fair amount of non fiction – perhaps prompted by my travels. The State of Africa by Martin Meredith has quickly become essential reading amongst colleagues working in Africa and is a sobering discussion of the continuing impact of colonialism on the African continent.

Trump, and the impact of his presidency, kept on popping up in my reading list which in turn resulted in me turning to Naomi Klein’s No Is Not Enough with other of her books now on my list for 2019. Perhaps Trump, and the new world order, were responsible for me turning to Shute’s On the Beach, made all the more real by own first hand experience of some of the locations in that book.

A trip to China last year resulted in me picking up The Silk Roads and later The New Silk Roads by Peter Frankopan which in turn resonated with my work in Africa where the impact of the Chinese One Belt One Road initiative can be felt every day.

I may not have taken as many photographs this year as I wanted but my passion remains and so John Berger’s Way of Seeing and Camera Lucida by Roland Barthes both found a place in my list.

In my more philosophical moments I found myself thinking about different ways of living and seeing the world hence Mindfulness (barely a book but who’s counting?), Goodbye Things and Letters to a Young Muslim.

There will always be a place for London in my heart so that choice was easy and a long time awaited.

And of course there was room for novels. The Handmaid’s Tale adding to the dystopian undercurrent to so much of my reading this year and Anna Burns’ superb Milkman painting a vivid and quirky picture of the troubles that cast a shadow over so many lives for so long, and yet another connection given the obvious implications of various shades of Brexit for those same people.

I have even completed my first novel in Spanish, essential preparation as I study for the examinations that stand between me and my application for a Spanish passport. More about which I will write in due course.

And, finally, all those hours in the air also provide time to read the news and indulge myself in my passion for photography. 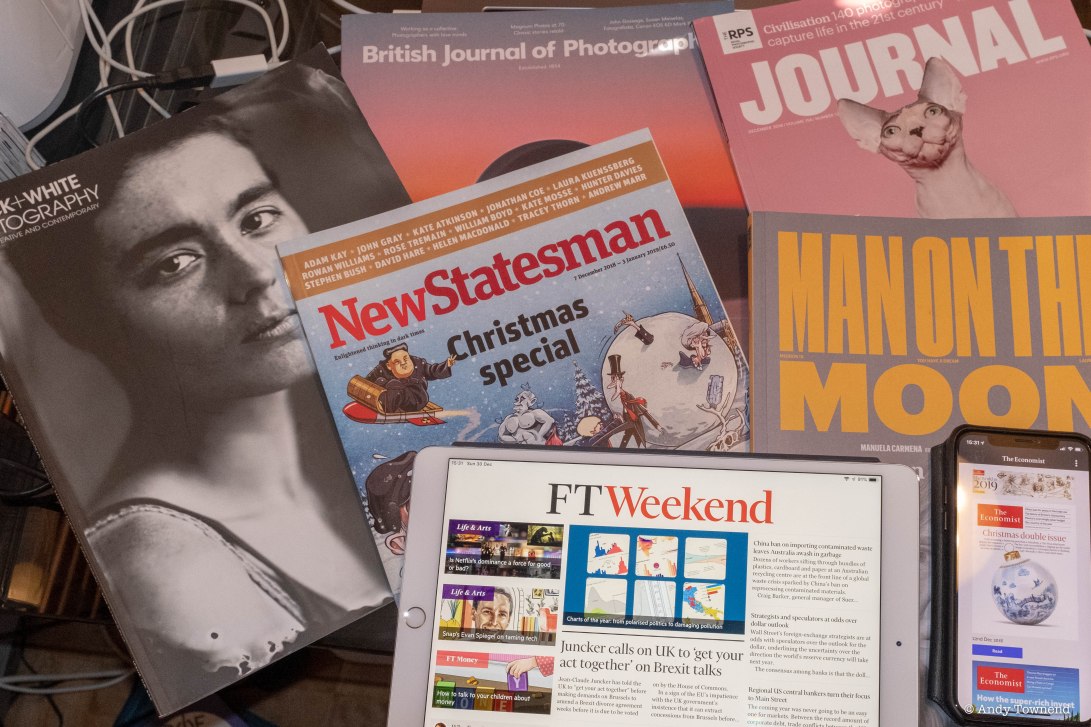 As an aside, the powers that be at Madrid’s airport recently replaced the Relay bookstores with WHSmith, this has resulted in a vastly reduced selection of Spanish books and magazines replacing them with cheap souvenirs and ‘best sellers’. In particular it is now almost impossible to get hold of a copy of the excellent new Spanish magazine Man on the Moon or its sister publication Tapas.

All of which leaves it time for me to wish you a very Happy New Year and I look forward to sharing more writing and photography with you in 2019.

9 thoughts on “on reading”