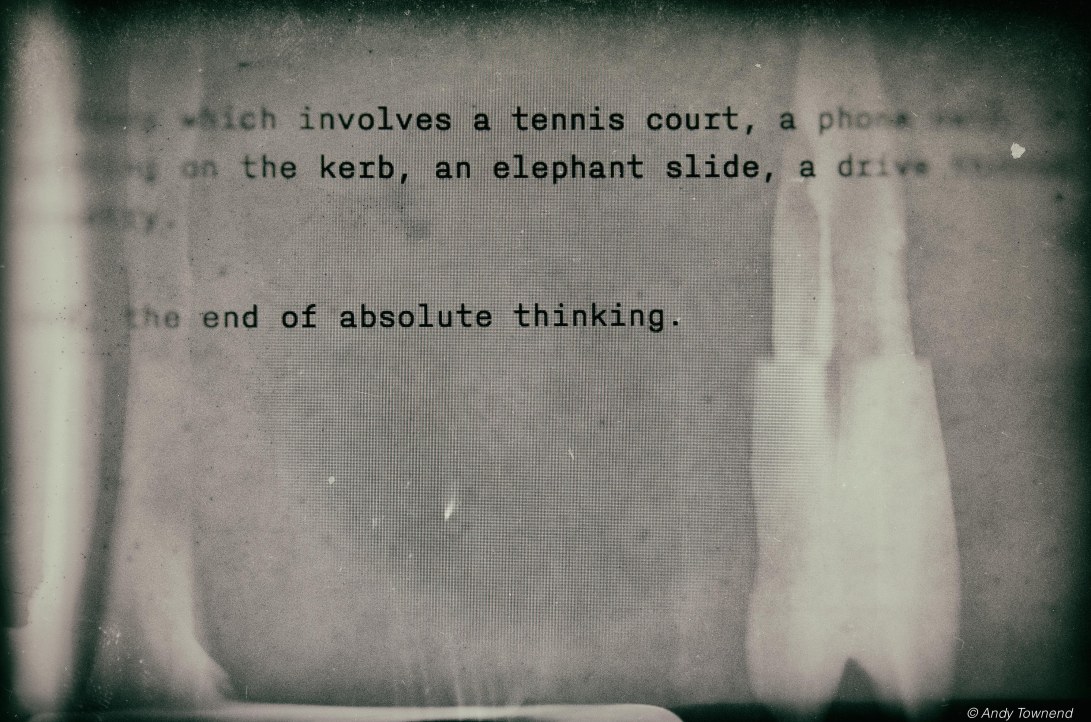 I have been thinking a lot recently about absolutes.

You know, right and wrong, good and bad, left and right, up and down, inside and out, yes and no, true and false. Perhaps even, lost and found.

What strikes me about all of these absolutes is how little relevance they end up having in life. Well, ok, maybe when you are driving, the concept of left and right is fairly fundamental.

But, I do recall, as I followed the tangential arc of learning, how many things learned as a child had to be unlearned, as I discovered that things “don’t work quite like that”. The mind boggling transition from Newtonian physics where everything is grounded by an apple tree to the insane world of quantum mechanics and the trials and tribulations of Schrödinger’s poor mistreated cat.

The point I am (not) making is that as child we often see things in this absolute sense and it is only later, as life happens to us, that we begin to see the ambiguity of our world in all its glory, and sometimes, its horror.

And then the places that shaped us, that seemed like rocks, foundations, safe havens, gradually slip away. My sister texted me today to tell me she was standing outside my former Hall of Residence at University in London. Or, more correctly, she was standing next to a hole in the ground where it used to be. A similar fate met my boyhood school some years back. My foundations not just crumbling, but demolished and replaced. And in their place, in years to come, someone else’s foundations will take their place.

I intend to write about my father.

About what happened to him. Or what he “happened”. And about the consequences. The final end to the right and wrong phase. The time that Schrödinger’s cat finally bit deep into Newton’s apple.

A story which involves a tennis court, a phone call, a student sitting on the kerb, an elephant slide, a drive through the country.

And, the end of absolute thinking.